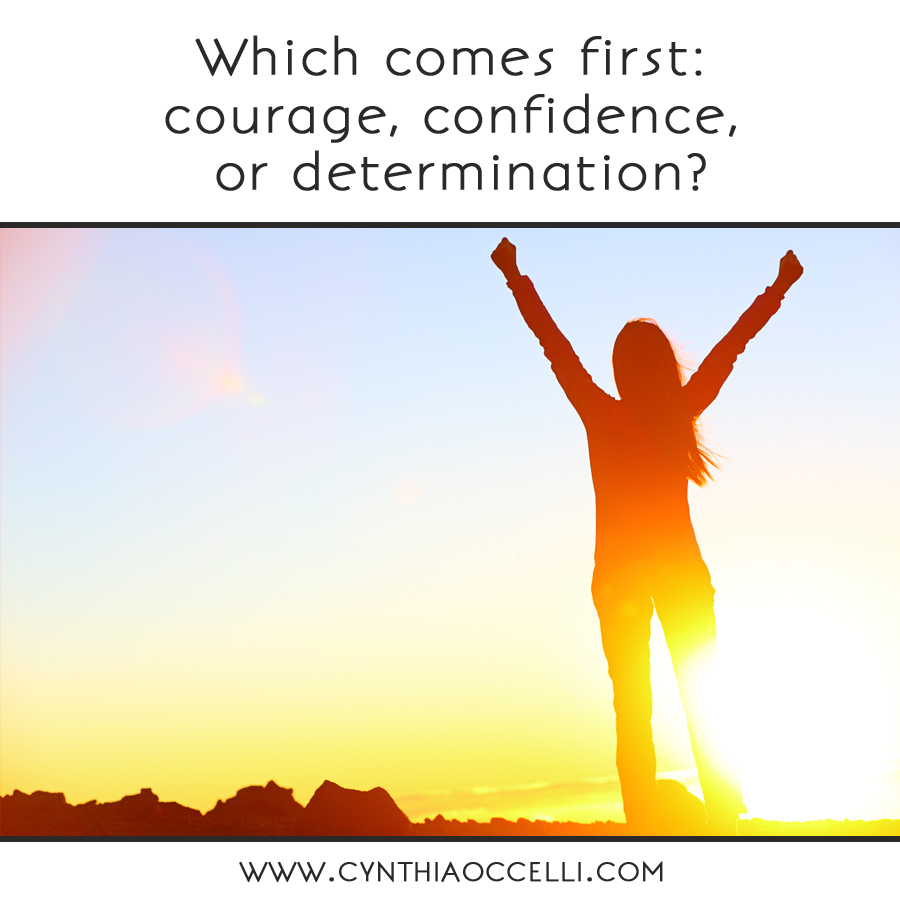 How many times have you wanted to do something new, or take a risk, and instead of stepping up and attempting it, you stepped back and wished that you were more confident? Is there something in your life that you really want, but you’re waiting to have the confidence to go for it? Do you believe that once you’re confident, you’ll get started?

Confidence comes as the result of stepping out and taking risks, not waiting for it. When you actually do what you’re aching to do, you’ll become more confident—even if you fail. Confidence comes from doing, and courage bridges the gap between having and lacking it.

It takes courage to reach for a better life, to try something you’re a novice at, to risk embarrassment, and to look less than perfect or even failing. And courage is a choice. When you’re facing a chasm and your dream sits on the other side of it, courage will help you figure out how to get there.

What happens when you give your best and it explodes in your face? Call up determination. Determination is the hardening of inner-will—the corralling of mind, body, and soul into a single effort. Together, courage and determination produce results, and those results create the kind of confidence that no one can take from you.See for yourself.

After more than a decade of training, my son attempted to earn his 3rd-degree black-belt in Tae Kwon Do. The black-belt test required demonstrating mastery of all Tae Kwon Do Forms, several miles of timed running, successful completion of an intense physical fitness test, multiple sparring matches against three simultaneous opponents, and breaking three stacked concrete bricks with his hand. He successfully completed all of the requirements up to breaking the bricks.

Exhausted, but excited by how close he was to achieving his dream, he stepped up to the bricks and wondered, “What if I can’t do it? Everyone is here, I’ve come so far, what if I don’t make it?” Courage spoke up, telling him that he had to try.

He raised his hand up and back, measuring the distance, and envisioning the strike. Then, he gave it his all. His hand slammed into the bricks, and instead of breaking them, his skin split open. It was devastating. He stood there stunned, cradling his bleeding hand, and began sobbing.

His teacher took him aside and explained that the task was daunting, he’d made a valiant effort, and not to feel bad. He said to practice more and try again another day, or perhaps they could make an exception and reduce the number of bricks for him. My son responded, “I’ve practiced for years and I don’t want any special treatment, I want what I’ve worked for.” His teacher discouraged him. No one had ever recovered from a failed 3-brick break on the same day, let alone with a bruised and bloody hand. My son took a few moments for himself in the privacy of the locker room and returned to the stack of bricks. Here’s what happened: (click here or click the image to play):

—
—
—
When you’re finished watching, leave me a comment and tell me something you’ve done that resulted in you becoming more confident.